I love music. I enjoy many different varieties but one of my favorite genres is classic rock and one of my favorite groups was Van Halen.  I was a fan until lead singer David Lee Roth left the band in 1986.  A that time, Van Halen was one of the biggest rock bands in the world.  Roth quickly formed a new band and recorded his first solo album, “Eat ‘Em And Smile”. The music picked up where Roth and Van Halen had left off. Loud, hard guitar rock. While that in itself is not that interesting, I was surprised to learn  “Eat ‘Em And Smile” had a twin brother who spoke Spanish: “Sonrisa Salvaje” (“Wild Smile”).  In a most unusual decision, Roth decided to re-cut his vocals for the album so a Spanish-language version could be released. Nothing would be too much for Roth to show the Van Halen brothers who the star really was. 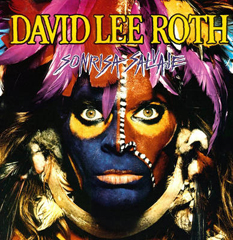 The decision to record new Spanish vocals over the songs was supposedly inspired by bassist Billy Sheehan, who told Roth that half the Mexican population was in their 18-27-year-old record-buying demographic, and would be the perfect audience for the record — if they could understand him. When “Sonrisa Salvaje” arrived in stores (mostly in Mexico and South America), Spanish-speaking rockers were apparently not impressed with Roth’s verbal gymnastics. Rhino Records called it “gringo Spanish.” The album sold poorly (it was out of print for years before recently getting reissued and remastered). This had never been tried in the hard rock world. Back then there was no “rock en español”. Even rock bands from Spanish-speaking countries sang in English.  It would be years before bands like Maná would challenge and change that perception.

The translation of the lyrics and the spirit of the song into Spanish does not always fit smoothly into the music. At times Roth has to repeat words (“doubletime”) to make it work. But when you consider there isn’t anything like it in the hard rock/ heavy metal realm, you realize it is something special. I never purchased “Eat ‘Em And Smile” so I can’t compare all the songs to their “hermanos”. I don’t find his Spanish terrible and the translations mostly work. Sometimes Roths’s pronunciation is so bad that it’s funny but that is also part of his act: a “let’s party and have fun” vibe all throughout.

Other rock artists back then did record Spanish versions of their hits, like Blondie with “Call Me”. But Roth’s experiment was unique, even if it failed. “Eat ‘Em And Smile”, however, remains his best work outside of Van Halen. It’s a well-regarded recording of this genre and era. “Sonrisa Salvaje”? Maybe not so much but it it did put a “sonrisa” on my face when I listened to it for the first time.

Lineage hailing from the Quiroga valley in Galicia.  Name of reknown all over the Peninsula, as their caballeros were involved from the onset in the battles for the Reconquest of Spain, with great demonstrations of nobility and valor.